Every now and then a sysadmin or a developer comes into a situation where he wishes he had not created one big partition or deletes a partition and wishes to grow one file system over the next partition. Besides growing file system, btrfs also supports shrinking in a seemingly simple command. Because the filesystem and partition meddling is always a scary operation, I was wondering if the resize operation actually moves data on btrfs.

This simple test uses blktrace and seekwatcher to trace and visualize how has the file system actually been accessing the underlying block device.

To test this I set up a 2GB disk image and used blktrace on it, to record block device access:

Since blktrace can only operate on a block device (and not a file), we need to setup the image as a loop device:

Let's create a btrfs file system on it:

Assuming the block allocation strategy is to allocate the blocks at the start of the device first, I put up a script that forces the filesystem to write in the second part of the file system, then removing padding files and issuing a resize operation to shrink the file system into half its previous size. This should move the data in latter blocks to first half of device.

This script makes two copies of Ubuntu server image at 829MB each, thus using roughly about 1660MB of (assuming) mostly the first part of disk. These two files serve as padding in order to force the file system to use the second half of disk, where it will (still assuming) place the mini.iso file. After this, the two bigger files are deleted in order to make space on device so the resize operation can actually complete. The script:

In another shell, I'm running blktrace:

The ^C shows I've interrupted it after the test script completed. Blktrace outputs per-cpu data about which blocks were accessed. Seekwatcher takes these files and visualizes them:

The following graph shows how the at the start of script (first 5 seconds) most of the disk is filled, when the two copies of ubuntu are placed on the drive. Then at 16 seconds, the mini.iso is placed almost at the end of drive. At about 26 seconds the resize operation is done, where the filesystem does actually move the mini.iso to another place on device. Yay!

Besides disk offset, seekwatcher also displays throughput, seek count and IOPs, all nicely aligned by time so you can quickly see what is happening with disks when you need to, as seen in the whole graph below. 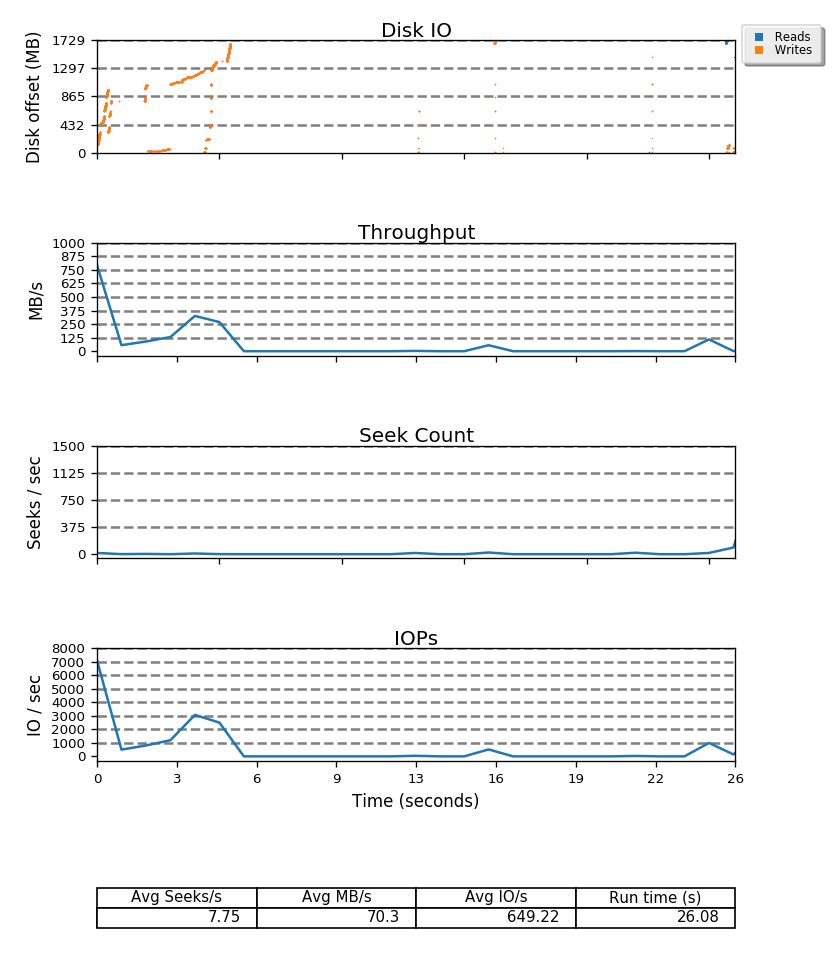